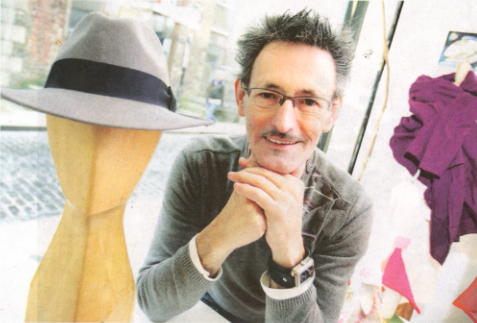 Shevlin Millinery is a registered member
of the Crafts Council of Ireland.

John Shevlin’s late father started a hat manufacturing company,in Malahide, Co. Dublin in 1960.John has followed in the tradition and has designed and made hats for many outlets in Ireland, including A-Wear, Arnotts, Accessorise, The Hat Shop Dublin.

Shevlin Millinery remains the only blocked felt and straw hat manufacturer in Ireland.

He is also the only maker of real panama hats for ladies and gents, not just the classic ecru Panama but also in various colours.

John ranks as one of the most established and respected milliners on the Irish fashion scene and his made to measure hats are exported all over the world.

One of his celebrity customers is the one and only Jean Butler of Riverdance fame.

and has made hats for leading Irish couturiers Ib Jorgensen and Thomas Wolfangel.

Senator David Norris commissioned John to restore his ancient trade-mark boater, which was painstakingly done with strips of straw re-woven, to replace the holes in his well worn Joycean boater.

John Also collaborated with artist Will St. Ledger for the exhibition “Celebrity Guns & Ammo” in The Hive, Dublin in the summer of 2007.

The Gate Theatre in 2010 commissioned John to make a hat for the renowned actor Owen Roe, for Samuel Beckett’s Endgame, directed by Alan Stanford.

Shevlin hats are regularly featured in Image, Social and Personal and Irish Tatler. Other publications include The Sunday Business Post, Gloss Magazine, Ireland of the Welcomes magazine and various weekend newspaper magazines. John has also  been on RTE’s Off The Rails, RTE’s The Business programme, RTE’s “Made in Ireland” series with Pat Kenny, TV3 Am and City Channel. His hats are regularly featured on various fashion blogs.Shevlin hats come in a wide variety of different styles and can be made to measure for no extra cost!  The Shevlin Brand will make a return to Arnotts Department Store, Dublin in September 2012.